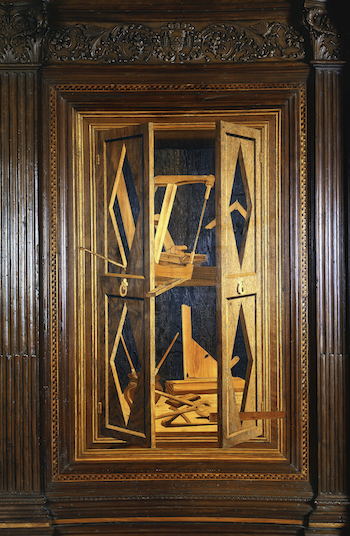 As I was putting together my book, A Marquetry Odyssey, I knew that there was a handful of pictures that had to be included. One of them was the self-portrait of Antonio Barili.

Barili was born in Siena in1453. He was a layperson but did his important work decorating churches in Tuscany.

In the self-portrait Barili has placed himself working within a window on an inlaid tablet. He is using a knife levered against his shoulder to cut letters into the tablet. The words, in Latin, translate, “This work I, Anotnio Barili, made with the knife, not the brush, in the year of our Lord 1502.”

This panel was one of nineteen made for the Duomo of Siena. Over the years they were dispersed. Seven can still be found in a small church in San Quirico d’Orcia south of Siena. Sadly, the self-portrait was destroyed during World War II and our only record is this black and white photo.

One of the pictures at San Quirico is a trompel’oeil open cupboard with tools of the intarsiatori. The shoulder knife is sticking through the opening in the cupboard door. Additionally there is a saw, a  glue pot, a small plane, and several measuring instruments.