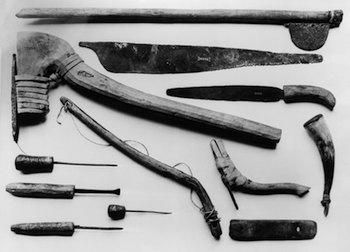 The roots of the marquetry craft go back to ancient Egypt. There is a fragment of a box at the Ashmolean Museum in Oxford, England that might not appear too exciting, but it is the oldest piece of marquetry to have ever been found. It is dated to approximately 3000 BCE.

It is a piece of wood with a basketweave carved into it and then triangles of faience glued into a recess. The triangles are pieced together in a parquetry pattern. Voila! Early marquetry.

Woodworking in ancient Egypt must have been extremely laborious as there were no iron tools. Saws and chisels were made of copper. The second tool from the top in the picture is a saw. It was made by hammering a lump of copper into a blade and then continuing to hit the edge until the metal frayed. These were the teeth of the tool. Imagine trying to saw a hard material like ebony or ivory this way. But the Egyptians weren’t shy about undertaking difficult tasks requiring many, many man hours. After all, these were the people who built the pyramids.