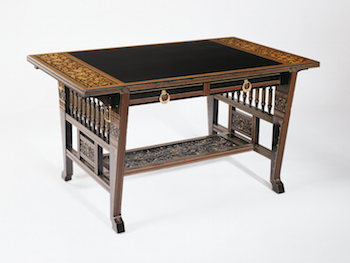 Many Germans emigrated to America in the middle of the 19th century (including some of my ancestors…).

Gustave and Christian Herter came from Wurttemberg and settled in New York. Initially their work was indistinguishable from much of the furniture being built on the continent. However, by 1870 they were doing unique pieces that caught the eye of many newly wealthy Americans, including several Vanderbilts. Marquetry decoration set in rich materials like ebony and rosewood became a hallmark of their style.

This table, from around 1877, has stylized flowers in the Japanese style that was popular at the time. Japan had only recently been opened to the west and Americans were fascinated with the culture.

The table is in the collection of the Virginia Museum of Fine Art in Richmond.