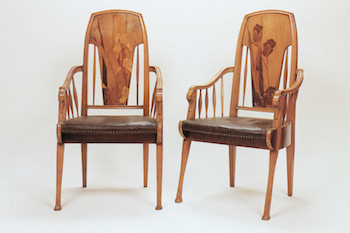 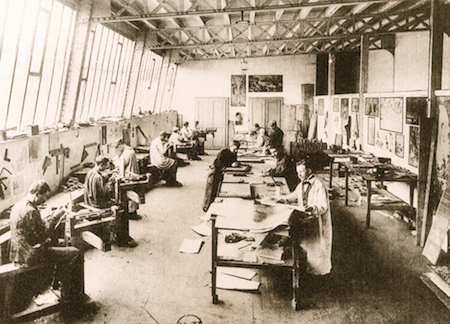 Nancy, in eastern France, was a hotbed of marquetry furniture at the turn of the twentieth century. It was home to Emile Gallé (see earlier post), as well as another important designer of marquetry furniture, Louis Majorelle. Majorelle had a significant business and employed about 250 people in the factory. Marquetry decoration was the signature of the Majorelle design.

These chairs are typical of the product produced by Majorelle. Floral marquetry combined with sinuous carving.

Here is a picture of the Majorelle marquetry atelier. Six men are working using the traditional saw, the chevalet, to cut the motifs. Multiple parts can be cut in a stack and in that way duplicate pictures can be made. The chairs shown here may well have been made in multiples. Marquetry would have been one dedicated job within the factory. Joiners assembled chairs, carvers shaped parts, finishers applied varnish, and upholsterers done the seats.

The results are stunning!