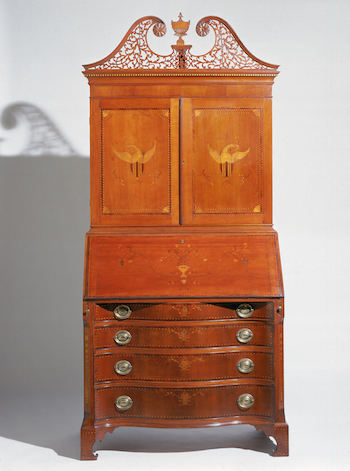 Early American furniture is not known for elaborate use of marquetry. Decorative elements were more likely to have been carved. But on occasion tasteful inlay was used to enhance a special piece of furniture.

Nathan Lombard was a cabinetmaker working in Massachusetts at the end of the 18th century. One of Lombard’s most famous pieces is a secretary/bookcase now on display at the Winterthur Museum in Delaware. It was built around 1800.

Panels and drawers are framed in with two-tone bandings and simple shell fans. Escutcheons have floral motifs. The verticals next to the drawers have bellflowers. The desk fall front has a bit more elaborate floral inlay, but the part that seems especially unique are the two inlaid eagles on the upper doors.

The United States had only recently won its independence. The eagle was the national symbol. Lombard put these eagles front and center on this piece and one can only imagine that he (or the client) wanted to show the patriotic spirit.