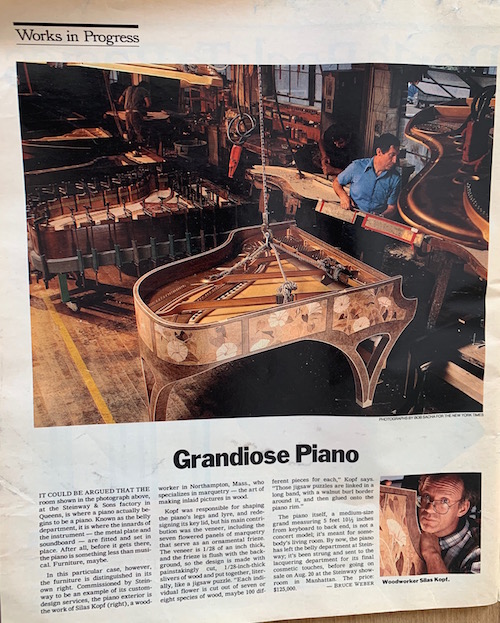 I was recently doing a little housekeeping and attempting to “uncluttered” a bit. I came across a box of newspaper and magazine clippings. I wonder why I had ever thought to save most of them. And then I found this- it was the last page of the New York Times Sunday Magazine.

I had been commission by Steinway and Sons to make an art case piano. For the marquetry motif I chose to do morning glories running around the rim of the instrument.

When the marquetry was cut and taped I took it to the factory in New York and it was glued to a rim. After curing it went through all the steps that every piano had to go through on the way to becoming a Steinway grand. But after the interior structure was in place they sent it back to me to build the legs and other accessory parts.

Then back to the factory to be assembled. That’s when this picture was taken. It proved to be more publicity than I had ever gotten (or probably ever will). It was a fun gig.

Subsequently I have done five other pianos and over the course of time I will be posting them.